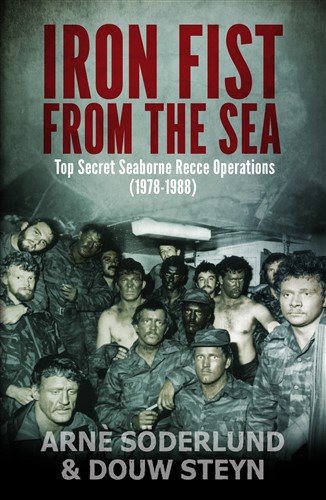 From Cabinda in Angola to Dar es Salaam in Tanzania 4 Reconnaissance Regiment conducted numerous clandestine seaborne raids during the Border War. They attacked strategic targets such as oil facilities, transport infrastructure and even Russian ships. All the while 4 Recce’s existence and capability was largely kept secret, even within the South African Defence Force.

With unparalleled access to previously top secret documents, 50 operations undertaken by 4 Recce, other Special Forces units and the South African Navy are described. The daunting Operation Kerslig (1981), in which an operator died in a raid on a Luanda oil refinery and others were injured, is retold in spine-tingling detail.

The book reveals the versatility and effectiveness of this elite unit and also tells of both the successes and failures of its actions. Sometimes missions go wrong, as in Operation Argon (1985) when Captain Wynand Du Toit was captured.

This fascinating work will enthrall anyone with an interest in Special Forces operations. Iron Fist from the Sea takes you right to the raging surf, to the adrenalin and fear that is seaborne raiding.